The US is an example of the general case. Infrastructure tends to be failing, and climate change makes this worse. The costs and effects of failing infrastructure could make transition to a more resilient ‘sustainable’ society, even more difficult.

The first thing to understand is that US infrastructure (which includes roads, bridges, dams, airports, sea ports, drinking water, power lines, pipelines, waste storage, inland waterways, levees etc) is falling apart at the moment. The American Society of Civil Engineers (ASCE) has been pointing this out for years.

In their most recent “report card”, issued in 2017, the ASCE estimated that the US needs to spend about $4.5 trillion by 2025 to fix the problem. They say this is a serious problem, requiring serious spending, and it is not going to get better ‘naturally’. As no one is getting ready to spend anything like that, the situation will continue to get worse, more costly to fix, and harder to fix. Patch up jobs merely mask the problem.

What climate change adds to this situation, is that it appears to be bringing more extreme weather events. This puts more pressure on infrastructure.

For example, dams and levees will have to survive more frequent, rapid and severe flooding and storm surges. Such storms are also likely to affect drinking water (also affected by mining and fracking, and possible lowered testing standards as money is taken away from Government based Environmental supervision). Storms in other countries such as Australia (I’m not a US resident, so I’m not up to date with US events) have already caused blackouts, through knocking down power lines; the more decayed the infrastructure, the more they will be knocked down. Roads and bridges also tend to get swept away by severe events. Research has already shown that gas pipelines are leaking badly – oil pipelines breaks are more visible and thus tend to get fixed – but more severe storms will increase both the rate of leakage and possible fire danger.

Rising sea levels, which now appear locked in as Antarctica starts to melt, will affect ports, and anything built on low lying land. This often includes oil refineries, and major cities that have grown around ports. Storms and storm surges are likely to increase along US coasts, especially down south as we seem to be seeing already in the Gulf of Mexico, and off-Florida. Whether people have been lucky so far, or whether the storms will generally avoid the coastline we will see with time. Relatively, small increases in water levels can drastically increase the damage from storm surges on low lying land, or up waste water pipes that dump into the sea.

Increased heat and drought, in some parts of the country, will increase wildfires, and we seem to have already seen this in California and in many other parts of the world – again Australia leads the way. Droughts also bring threats to food supplies and farm profitability. This can be compounded by privatized water supplies, which take water from rivers and deliver it to wealthy businesses – not all infrastructure is necessarily beneficial to everyone. Humans do not work well in runs of extreme heat (anything over 40 degrees centigrade), especially if they are already not well, and this will put extra strain on hospitals, not to mention families and incomes.

Changes in permafrost conditions in the Northern US, may weaken foundations, leading to built item collapse….

Furthermore, most of the US’s infrastructure (and everyone else’s) has been designed with the assumption that climate will remain stable. It is not designed for resilience under changing weather conditions. Even if it had been designed with this change in mind, it is extremely hard to predict what local conditions will become – climate is a complex system, and while we can predict trends we cannot predict specific events.

The US Fourth National Climate Assessment suggests that the US government “must act aggressively to adapt to current impacts and mitigate future catastrophes…to avoid substantial damages to the U.S. economy, environment, and human health and well-being over the coming decades” and “climate change is expected to cause substantial losses to infrastructure and property and impede the rate of economic growth over this century.”

It is highly probable that increasing destructive stresses on failing infrastructure will have harmful results.

The most obvious result is massive economic disruption, and disruption of transmission of vital supplies, such as water, food and energy. Modern Western cities are not designed to be self-sustaining; if they are cut off from supplies then living conditions will rapidly become difficult for most people. Places like Cuba where cities have been built around much smaller supplies of petrol, and less elaborate infrastructure, may be more resilient, but they are likely to be greatly affected by weather. Effects will not be uniform.

The extra cost of repair will probably take money away from transition to a more resilient, less polluting system. It could perhaps inspire such changes, as the old system falls down, but that depends on whether established power relations actively strive to stop transition and demand more of what their wealth has been built around. Current political behavior, does not suggest optimism.

Insurance companies are getting worried, and it will be getting harder to insure property in particular locations, and infrastructure is part of what makes a location, and adds to, or diminishes its vulnerability. “Insurers have warned that climate change could make cover for ordinary people unaffordable after the world’s largest reinsurance firm blamed global warming for $24bn (£18bn) of losses in the Californian wildfires”. This will increase the precariousness of life, for ordinary people, and add to their difficulties of making ends meet, especially under the likely new normality of extreme weather events.

You might want to see whether your own costs are increasing, or your local area is becoming uninsurable.

There is another form of ‘infrastructure’ which is often ignored in discussions of failing infrastructure. This is the natural ecology. The natural ecology provides many services we need vitally, but do not notice because they have been provided freely of human action (even if some of them have been charged for). These services include: oxygen supply, waste removal, drinkable water, food supply, and so on. Continual pollution, poisoning and destruction of this infrastructure in the name of development and profit, diminishes the ability of the natural infrastructure to deliver its services, which adds further stress to social life, and increases the likelihood of extra costs and disaster.

Climate change is a consequence of the destruction of this wider infrastructure, and adds to the destruction in a positive feedback loop. Again, the situation will not get better by itself.

Infrastructure (both human-built and natural) is falling apart in the first place, and not designed to face the added climate stresses we are all facing. It is likely to slowly crash, and the results of the crash may not be protected, or coverable, by insurance.

Refusing to consider the problem, which is what most governments are doing, because of the costs, will not make it better. Declining tax revenues (largely because of corporate tax evasion, taking profits overseas, and tax cuts for the wealthy) do not make dealing with the problem easier.

On the other hand, some governments seem to be actively trying to make the situation worse, by lessening restrictions on ecologically damaging behavior by corporations, and encouraging fossil fuel use and pollution.

Those governments are not acting in your best interests whether you ‘believe’ in climate change or not. Political action is required for survival. 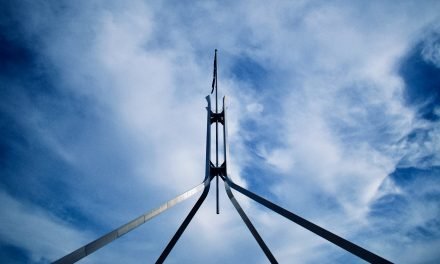 Australian response to the IPCC report: Technology and magic