Another meme that seems to circulate around the net is that climate scientists are saying the world will end in 12 years. This would appear to be ridiculous, and therefore is intended to discredit the whole idea of climate change.

I personally don’t know of, nor have I read of, any scientists who warn that the world will end in 12 years due to climate change. As usual, I’m welcome to correction, but I doubt this will happen.

However, what plenty of people have warned is that we have about 12 years left in which to seriously diminish the causes of climate change. If we don’t, the weather conditions are likely to move into greater degrees of instability and tumultuousness, and sea level rises will be significant.

With only a warming of one degree, it appears that areas of the USA seem to be on the edge of failing to cope with the stresses of fires, floods and storms, and areas like Puerto Rico seem to have largely been abandoned by the current US government. The same is becoming true in Australia; areas are getting too hot for habitation, and water supplies seem to be diminishing (sometimes because of mining as well as climate change).

As chaotic weather gets worse, it will cost billions in destroyed property, and distract from other economic activity. It will probably also mean massive people movements, food shortages and so on.

I quote here from the LA times

By the end of the century, the manifold consequences of unchecked climate change will cost the U.S. hundreds of billions of dollars per year, according to a new study by scientists at the Environmental Protection Agency. (emphasis added)

Cynically, this is probably a reason why EPA research is being cut back; it gives results some people might not want to hear, and might not want other people to hear.

However, while climate change could well begin the end of the civilizations we know and live in, and lead to lots of people dying, it won’t end the world. The world will carry on and some humans, those who have learnt to co-operate and have farming or hunting and gathering skills, will probably survive. With some luck, relatively large scale societies in more fortunate parts of the world may well survive. The scale and prosperity of social life we have now in the developed world and are aiming at elsewhere, will probably end.

Strangely, attempting to prevent this collapse seems relatively easy. People can disagree about what action is needed to diminish climate change, but it usually comes down to phasing out fossil fuels as quickly as possible, lowering other forms of pollution and poisoning coming from productive processes, and not taking more fish and trees than can be grown back.

If we would like long term survival, this would seem sensible anyhow. 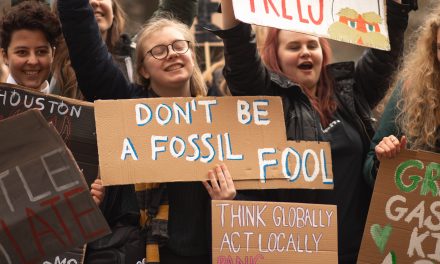